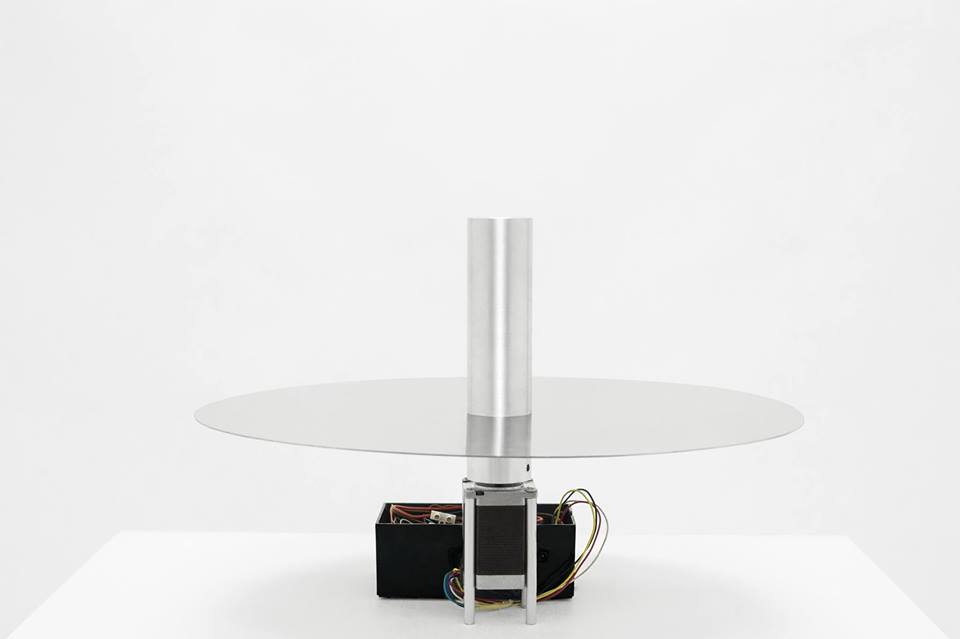 “The exhibition LA MACCHINA is articulated as an atypical mosaic of 2501’s work organized in different narrative plans: installations as sculptures and prototypes, paintings on paper, performance. These works have been designed over the past three years as part of the ongoing Nomadic Experiment project.
The exhibition questions how the medium of painting is developed on the basis of interaction between man and machine, an assumption that allows to work on two antithetical channels, bringing opposites together: natural and synthetic, analog and digital, linear and circular.
Installations present various models of La Macchina, developed in partnership with recipient.cc, on which the artist and the public have painted (in the past and in other places, but always in real time) following the movement in Loop generated by the machine itself.
Going beyond the physical and structural aspects of the show, what emerges from the installations is that they are not “representations.” Do not lead to a theory outside of them, nor convey symbolic meanings.
They are instead “models” that fully express a desire of sculpture and painting to be used and developed, and seem to reproduce in a new form ­ inclusive and open to the unexpected ­ possibility to influence reality through the project in its entirety.
This broadening of perspective both to sculptural aim and the public is not so much due to the interest of translating the “real” in pictorial images, but to show the viewer how the structures, mechanisms and sounds create a new visual space.
By using a number of different techniques ­ sculpture, sound, painting and performance ­ these impulses are mixed with the experience between the audience and generative action of the artistic process.
At the opening on 24th September a live performance set, conceived as a synthesis of progression of content and techniques in the exhibition, will take place in order to enable lines, textures and signs produced by a prototype machine built specifically for the Lissone Museum of dialoguing with sounds of a battery and a modular analog synthesizer Doepfer.”